The second part of this week's post, another full week of adventures with Brick. This week, Brick runs into his sometimes girlfriend June Salisbury, while our villain continues to plot.

Apologies for the lapse in posting for awhile. I was ill for some time, followed by being out of state for awhile. As a result, this week I'm posting two weeks' worth of strips, including the post above this one. As for the strips themselves, notice the interesting technique that Gray uses for his "dark" scenes. Instead of detailing every shadow hyper-realistically, he's simply drawing the strip with white paint! It's a technique that allows him to get across the idea that the action is happening in a darkened room, yet you are able to see every single detail he wants you to without having to think very hard. Not bad.

Posted by Hugo Sleestak at 6:02 PM No comments:

Brick Bradford has always had more luck in the international market, and fortunately for us The Book Palace in London has a large online gallery of Brick Bradford comic book covers published in New Zealand in the late 1940's. The artwork may be adapted from panels from the strip. At any rate, it's a close approximation of Clarence Gray's very simple, linear style. Here are a few samples. 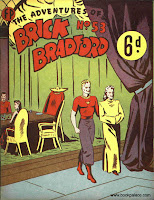 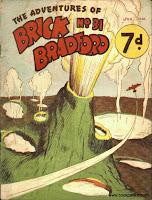 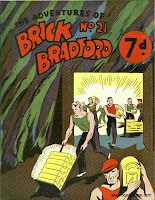 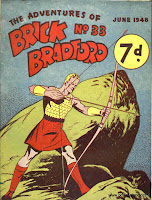 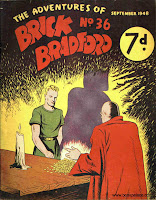 Posted by Hugo Sleestak at 9:57 AM No comments:

In telling us a bit of villain Franz Ego's back story, Dr. Kopak tells us that Ego was responsible for the influenza pandemic of 1918. That statement doesn't mean much to us today, but if you can imagine reading in a Superman comic that Lex Luthor was responsible for the development of the AIDS virus in the 1980's, then you might understand that author William Ritt was putting Franz Ego on a breathtaking level of pure malice that would resonate strongly with any reader old enough to remember those dark days. To quote from Stanford's page on the pandemic:

The influenza pandemic of 1918-1919 killed more people than the Great War, known today as World War I (WWI), at somewhere between 20 and 40 million people. It has been cited as the most devastating epidemic in recorded world history. More people died of influenza in a single year than in four-years of the Black Death Bubonic Plague from 1347 to 1351.

It's human nature to try to pin the blame on someone or some group when a disaster like the flu pandemic strikes. With the world at war, the enemy was especially easy to find. As PBS's American Experience page tells us:

One widely accepted notion -- outside of the medical profession, that is -- had German spies deliberately seeding Boston Harbor with influenza-sprouting germs. Such innuendo was lent credence by statements of individuals who should have known better. On September 17, 1918, Lt. Col. Philip Doane, head of the Health and Sanitation Section of the Emergency Fleet Corporation, forcefully voiced his opinion that the epidemic might have been started by Germans put ashore from U-Boats.

Conspiracy theories, then, fed into Ritt's creation of his strip's villain - a villain who had unleashed death and terror in our "real world" on a global level. Other fictional villains were always threatening to destroy the world, but Brick Bradford's enemy already had.
Posted by Hugo Sleestak at 4:53 PM No comments:

Just who is the evil Franz Ego?