One more Brick to throw - enter the villain!

With the third week of "Adrift in an Atom," Brick and his scientist friend Dr. Kalla Kopak encounter a figure from Kalla's past, the insidious Franz Ego. Franz's plan is to use Kalla's size-changing Element 85 and use it to create an army of gigantic super soldiers who could conquer the world for him. It's strongly hinted that he is working at the behest of a foreign military power (possibly Hitler's Germany?). 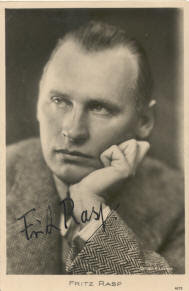 There are several hints in this week's continuity that help us understand the influences that scriptwriter William Ritt used to create his villain. At this late date it's just a hunch, but Franz Ego appears to be based on Turner, the villain in Fritz Lang's classic German film from 1929, "Woman in the Moon." "Woman in the Moon" was released in the United States in 1931, and focuses on the world's first successful moon landing. Fritz Rasp portrayed a character very similar to Franz Ego, a leering, sickeningly evil man who is a master of disguise and who represents a dark federation of international power brokers. Rasp's Turner is such a great villain that it would be difficult for someone like Ritt to resist stealing the character for his own purposes.

Again, just a guess, but anyone who has seen "Woman in the Moon" could see the similarities.
Posted by Hugo Sleestak at 4:36 PM